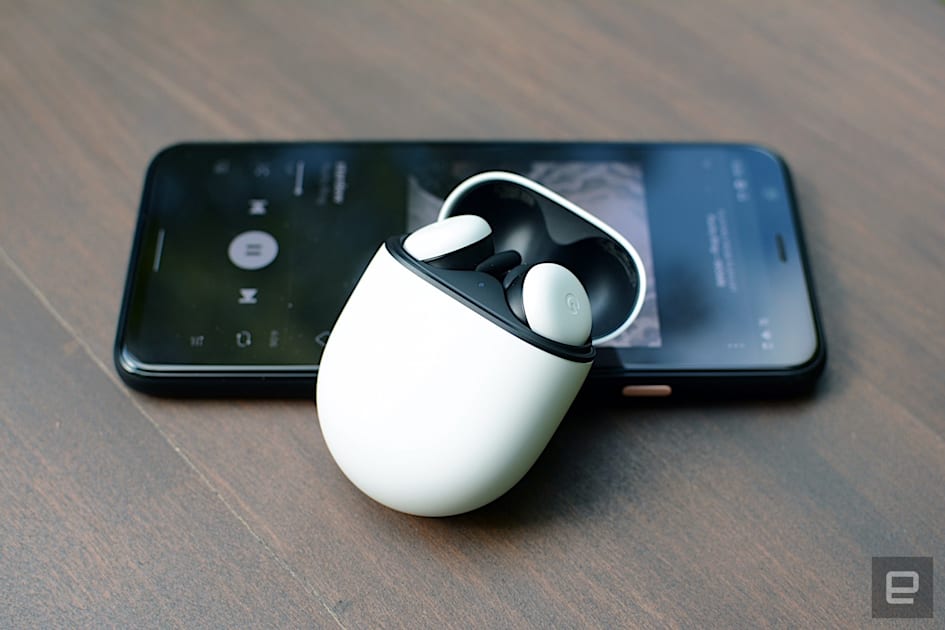 The first key difference between the two sets of Pixel Buds is that this new model is true wireless. The earbuds themselves still have the circular shape of the originals, but they’re much smaller. In our review of the first version, my colleague Chris Velazco noted the two-part design meant that half of the bud stuck out of your ear. With the new ones, even the tip that goes into your ear canal is smaller, so these don’t stick out nearly as far. This also means they fit more snugly, and the improved seal does a better job of blocking out ambient noise.

Speaking of fit, Google replaced the cord hoop on top of the first Pixels Buds with a more traditional fin. It’s a part you see on a lot of earbuds — both wired and wireless. The fin is rigid rubber, so it actually helps keep the Pixel Buds nestled in place. Not once did I feel like these were going to fall out, even during cardio workouts. Since the new Pixel Buds are IPX4 rated, they’ll easily stand up to sweat if you want to take them on a run or some other physical activity.

The compact size of the Pixel Buds makes them comfy to wear for long periods of time. Having something inserted into your ear holes will only ever be so comfortable, but keeping the size and weight down goes a long way. I was able to wear these for hours and I never felt like they were more taxing than they should be. They’re small and light, much like Jabra’s Elite 75t and Samsung’s Galaxy Buds+ — two other sets of earbuds that are easier to wear for hours than a lot of the competition.

One thing that was consistent on the first Pixel Buds were the touch controls, and they still work well. While the options for play/pause, skipping tracks and adjusting volume used to solely reside on the right earbud, they’re now mirrored on both sides. You still tap once for play/pause, twice to skip to the next song and three times to go back to the previous one. Turn the volume up by swiping from back to front and turn it down from swiping from front to back. The new Pixel Buds will also automatically pause when you remove one of them from your ear. Unlike the touch controls on some earbuds and headphones, I was able to master these almost right away. Not once did the Pixel Buds mistake a triple tap for something less. And I had no trouble changing the volume.

Like the earbuds themselves, the charging case is also much smaller. This isn’t much of a surprise given the fact that it no longer needs to accommodate a cord. Google says it designed the new Pixel Buds case to look and feel like a river stone. Indeed, the oval-shaped case is small and smooth, easily fitting in the palm of your hand or a small pocket in your bag. The magnetic closure is secure but not so much that you can’t flip open the lid with your thumb. When you do, separate LEDs (one outside and one inside) will let you know the charging status of both the case and the buds. Around back, there’s a Bluetooth pairing button you’ll need if you want to use these with a non-Android device, and the USB-C charging port is located on the bottom edge. The also supports wireless charging with a Qi-certified pad.

Speaking of that pairing button, the Pixel Buds will work with iOS devices, your desktop machine and any other gadget that supports Bluetooth 4.0 or higher. Of course, you sacrifice a lot of the handy features when you pair connect these to an iPhone or non-Android device. For example, the press and hold touch gesture doesn’t activate Siri. So while you can do it, you probably wouldn’t want to unless you really have to.

Even with all of the improvements, Google still didn’t include active noise cancellation (ANC) on the new Pixel Buds. Instead, the company opted for a feature called Adaptive Sound that automatically, and temporarily, adjusts the volume based on your surroundings. Once you get away from the raucous crowd, the earbuds should return to the volume you had set. It’s supposed to function like an automatic brightness adjustment for your display, only for sound. Given the current state of the world, I’m not visiting a packed coffee shop or other noisy venues these days, so I had to test this the best I could at home.

With things like a white noise machine and running water to wash dishes (the latter of which Google mentions as a specific use case), I wasn’t able to trigger Adaptive Sound to do its thing. I was able to activate it with crowd noise from an archived soccer match on my TV, but the sound increase is very subtle. I almost couldn’t tell it even happened. For this to be useful, the change needs to be noticeable, and perhaps coincide with a notification of some kind. So for now, the jury is still out.

If you like to let some of the sound of what’s going on around into your headphones or earbuds, these don’t do that either. So when you need to order a cortado or answer someone close by, you’ll have to pause the audio or risk shouting over it.