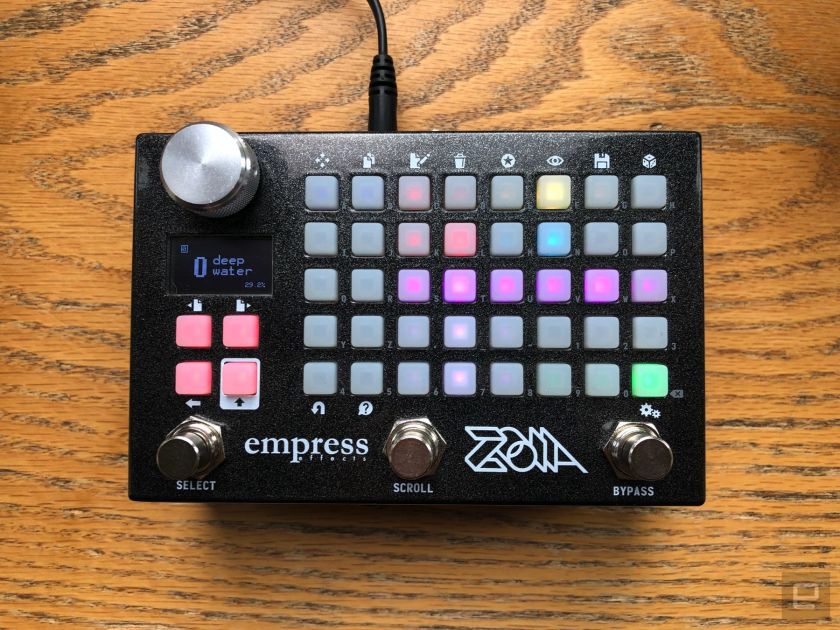 In some ways the ZOIA is not unlike Critter & Guitari’s Organelle. It’s a do-it-all music-making box that lets people build their own effects, synths and loopers. Like the Organelle, it rewards patience. But that’s where the similarities end. For one, the Organelle is a keyboard-based instrument, not a pedal — obviously. And while the Organelle M asks you to connect a monitor, mouse and a keyboard to build patches in Pure Data, the ZOIA requires no coding. Instead you place and connect modules using the five-by-eight grid of RGB pads on the front.

You can color-code the modules, which helps. But you’ll still need to remember which block controls what. Now, there are some advanced tricks that can make navigating settings easier, but that’s beyond the scope of this review.

What I will say is that patches on the ZOIA come alive when you worry less about tweaking knobs like you would on a traditional pedal and embrace its more unique automation features.

Let’s take our reverb patch: Right now it’s pretty boring. But what if we were to drop in an envelope follower? Connect the audio-in to the input, then connect the CV out (notice it uses the same language as modular synths) to the decay-time block on the reverb module. Now the harder you play, the longer the reverb tails will be. Instead of a boring, bog-standard reverb, you now have a dynamic effect that responds to your playing.

There are other ways to control the patches. For one, there’s a port for an expression pedal. That will let you change one or more parameters with your foot. You could use this in a traditional way like a wah or volume pedal. But you could also connect it to the wet/dry mix on a reverb and the feedback on a delay so that as you press the toe down, they both increase, causing cavernous repeats of your notes to pile up into a wall of noise until you rock the heel down.

Then there are the LFOs. You could slap down a simple sine wave and connect it to the speed of a vibrato so that the rate of the pitch fluctuations gets faster and slower over time. You could also put a sample and hold LFO on the width of that vibrato so that the amount of the pitch bends is changed to a random value (within a defined range) at a regular interval. Or, and bear with me here, you could connect an envelope follower to that random LFO so that the harder you play, the more frequently it changes the depth of the vibrato, creating an effect that gets more out of control as your playing gets more out of control.

MIDI integration opens up a whole other level of control, and I’ve honestly barely scratched the surface there. Most obviously you can connect a keyboard and play a synth patch. (There is a simple keyboard module that allows you to play the ZOIA physically.) But you could also connect a knob-heavy controller like the MIDI Fighter Twister or a Novation Launch Control and use that to tweak your patches. Or connect a sequencer and use that to change parameters or turn on and off various parts of a patch at predetermined times. You could even use the MIDI out on the ZOIA to trigger an external sequencer by stomping on one of its three foot switches, which in turn triggers changes on the ZOIA.

In this patch an expression pedal is controlling the feedback amount, modulation rate, and modulation depth on a delay.

This patch is a polyphonic string synthesizer with 4 LFOs being played using an external MIDI controller.

Things can get pretty complicated pretty quickly if you want them to. And this is where you start to brush up against the limits of the ZOIA’s interface. Our simple reverb patch is easy enough to navigate. But more complicated ones can be difficult to decipher, especially if you didn’t build them yourself. As the pages of modules pile up, keeping tabs on your connections and tracking down the parameters gets harder and harder.

A desktop editor or even just an app for sketching out patches before you commit them to the device would be a huge help. Empress said it has no intentions of creating such a thing, but the company is working on opening up the code to developers so that if someone else wants to build that app, they can.

Honestly though, you can build pretty complex patches before things get out of hand. After just a couple of days with the ZOIA, I had built an effect that was inspired by what an old sampler might sound like as it died. It’s not the most complicated ZOIA patch I’ve seen, but it’s far from a simple reverb.

In this patch a bit crusher and aliaser are combined to create a crunchy vibe similar to a ’90s-era MPC. An LFO applied to the aliasing amount gives it a sense of instability and creates waves of digital artifacts. There are two additional effects that can be turned on and off: a shallow vibrato connected to an envelope follower and a granular module (with the grain size connected to a sample and hold LFO) that introduces glitching and stuttering for full meltdown mode. Last, one of the foot switches momentarily freezes the granular buffer to create chaotic bursts of repeats.

Of course, you don’t have to build your own patches. There is an active community sharing their creations on Patchstorage. I’ve lost count of how many were posted there, but it’s well in excess of 500. They run the gamut from surprisingly solid overdrives and fuzzes to ambient reverbs, modulated madness and self-playing synths. There are even patches inspired by boutique effects pedals and vintage synths. The ability to give some more obscure effects a spot on my pedalboard through emulation has been huge. I stuck a recreation of Fairfield Circuitry’s Shallow Water at the end of my signal chain, and I’ve had such a hard time turning it off that I’ve decided I have to have one for real now. (The ZOIA may end up being very bad for my wallet…)

One of my favorite uses, though, has been as a chaotic and experimental looper or delay pedal. Patches like Loop Forest, JohannLooper and Rephrase can take even simple melodic ideas and immediately turn them into evolving rich compositions. At times, it feels like cheating.

Managing all these patches, though, is tedious. Again, there’s no app. No desktop library. Instead you copy patches to an included microSD card, using a specific naming convention, then choose “Patches from SD” in the settings menu. The ZOIA can only hold 64 patches at a time, and you have to manually change the names of files to make sure you don’t overwrite ones you want to keep.

Let’s say you’ve downloaded Loop Flux from Patchstorage. The file you get from there starts with “022.” That means it will be loaded in the 22nd preset slot. But what if you have an epic washy reverb you love there and instead you want to replace the flanger in slot 46 that you never use? Well, you have to change the file name from “022_zoia_Loop_flux.bin” to “046_zoia_Loop_flux.bin.” It’s not rocket science, but it can get frustrating to keep track of the patches you want, the ones you don’t and what slots you’ve loaded them into.

Normally this is where I lay out the competition and tell you how it stacks up. But there isn’t much direct competition out there. Perhaps the closest are the MOD Dwarf and the Poly Effects Digit. The Dwarf is $369, compared to the ZOIA’s $499. But it doesn’t have the same synth-based bones and is ultimately a pretty traditional multi-effects pedal — just with a much larger library of effects and an extremely flexible routing system. More important, though, it’s not shipping yet. Its creators successfully wrapped up a Kickstarter campaign in early April, but the usual caveats apply about any crowdfunded device.

Similarly the $399 Digit is a relatively straightforward multi-effects pedal, albeit one with intricate routing options and onboard LFOs. Its biggest feature is a five-inch touchscreen. That makes programming it much easier than programming the ZOIA or the Dwarf, but personally, I’d be afraid to put a display of that size anywhere near my clumsy, boot-covered feet.

Then there are high-end multi-effects units like the Eventide H9, which costs anywhere from $499 to $699. They sound amazing but don’t give you the ability to design your own effects.

That brings me back to my original point: The ZOIA is one of a kind. It’s not the most user friendly. But it is unique. And if you’ve ever dreamed of designing your own effects but don’t want to breadboard a new circuit every time you get an idea, then the ZOIA is unquestionably for you. If you’re just looking for standard-effects-pedal fair, then the ZOIA is probably overkill. It’s certainly capable of great choruses and ripping fuzz, but its true worth is in delivering hundreds of different strange and unexpected effects to your pedalboard. It’s entirely possible that after using it, all other stompboxes will seem boring.