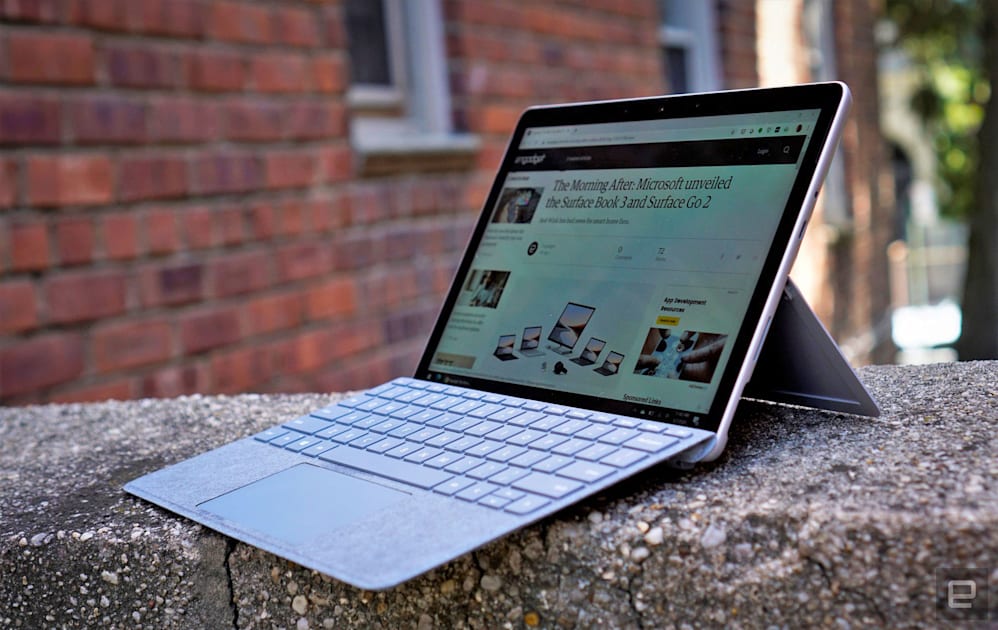 As a tablet, the Surface Go 2 felt as nimble as before. It’s easy to hold and great for browsing the web or the occasional comic. But I’m astounded that Windows 10 is still a wasteland when it comes to high-quality tablet apps. It’s 2020! Microsoft has had two years since the last Go and many years watching the iPad grow into a formidable threat to PCs. Where are the tablet apps? While you could use the Surface Go 2 as a slate, you’ll definitely spend most of your time with it in PC mode (yet another reason why it should come with the damn keyboard).

No matter how you’re using the Surface Go 2, you can expect it to last a decent amount of time. The Surface Go 2 lasted for 9 hours and 55 minutes during our battery benchmark, which involves looping an HD video. While that’s a respectable figure (and it’s comparable to the entry-level iPad), it’s only five minutes longer than the last model lasted. I definitely expected more of an improvement, especially since Microsoft is touting longer battery life as a key selling point.

If you’re considering the Surface Go 2, get the $630 model with the Core m3 processor, 8GB of RAM and 128GB SSD. That’s a decent sweet spot of price and performance — it’ll also be noticeably faster than any Pentium Gold model. If you have your heart set on LTE, be prepared to shell out $730.

As for competitors, there aren’t many. Most PC makers gave up on detachable notebooks years ago, which leaves Microsoft practically in a category of its own. The strongest alternatives are Apple’s $329 iPad and $499 iPad Air. The cheaper model will still offer better tablet apps than the priciest Surface Go 2. The iPad Air is a great option if you want more power but don’t want to jump up to Apple’s Pro tablets. Both iPads can also be equipped with keyboard cases like Logitech’s Combo Touch, so you can still be pretty productive.

I wanted to love the Surface Go 2. And with the right configuration, it can be a pretty useful tiny PC. But it’s not the wondrous $400 tablet Microsoft claims. It’s a shame the company didn’t do much to improve that entry-level experience over the past few years other than expanding the screen by half an inch. It’s called the Go, after all. Microsoft should be doing more to push forward.