Sonos Arc review: An upgrade worth the wait 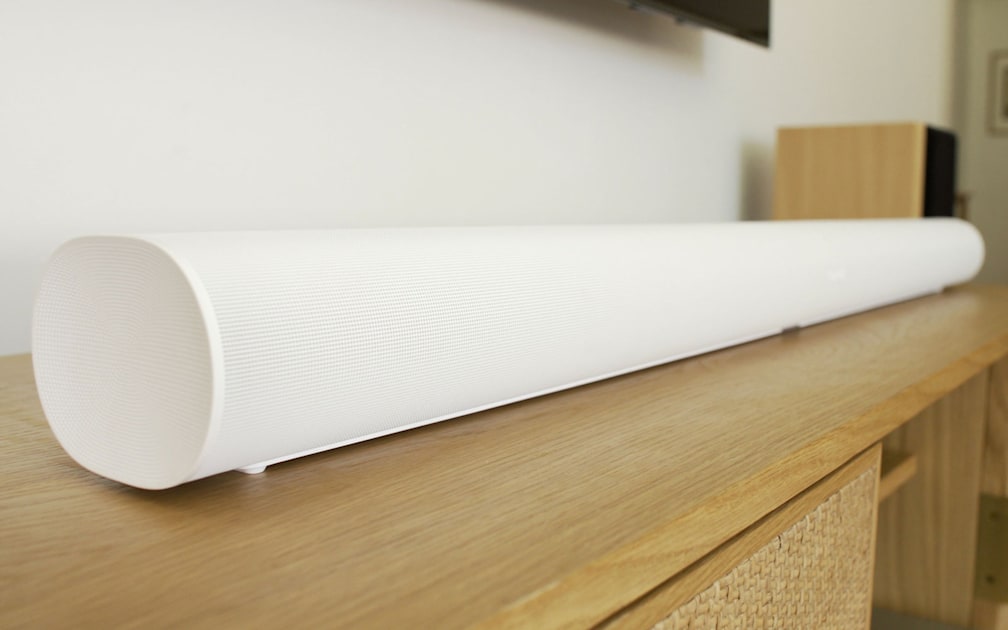 The full system with Arc, Sub and two One SLs is great for movies, as you get even more of the Atmos effect. It’s also expensive. Again, the good news is you can add to the soundbar gradually. Setting up new speakers in the Sonos app takes about five minutes, and that includes retuning everything with Trueplay. I’m not a huge movie buff, so I’m not sure I could justify shelling out almost $2,000 to go all in. However, if you like Sonos-specific features and you want all the immersion you can get out of Dolby Atmos, I doubt you’ll be disappointed. My advice is to start with the Arc and see what you need to add on later.

Plenty of soundbars offer Dolby Atmos support, but the Arc also doubles as a great-sounding speaker for music. In fact, I was impressed with the bass performance of the soundbar itself when it came to streaming Spotify and Tidal. I’ve tested soundbars with a dedicated sub that didn’t sound this good. There’s enough low-end to handle hip-hop and other bass-focused genres with ease, but it’s also restrained enough to help you avoid annoying your neighbors (to a certain extent). Sure, the Sub adds more thump, but again, most users will do just fine with the Arc on its own. To me, Arc itself has a bit too much treble at higher volumes, but I was able to adjust accordingly in the app for those raucous sessions.

Tidal recently announced Dolby Atmos Music support for compatible soundbars and TVs. It also works with Apple TV, Fire TV, Nvidia Shield TV and Shield TV Pro alongside some smart TVs from Sony and Philips. If you’re unfamiliar, Dolby Atmos Music is Sony’s 360 Reality Audio. It’s a more immersive listening experience that offers more clarity and detail in the music. Or, as Tidal explains it, the format ”puts you more directly in touch with the artist’s vision without compromise.” You can certainly tell a difference on the Arc when flipping back and forth between Tidal HiFi and Spotify, but the selection of songs is still limited. Plus, you’ll have to commit to a pricier subscription to get access.

If you aren’t happy with the factory tuning, the Sonos app offers an adjustable EQ. Here, you can tweak bass and treble or turn on loudness, which adjusts certain frequencies that might get lost when listening at lower volumes. You can also deactivate the Trueplay tuning or retune as needed (like if you add more speakers). When you’re watching TV there are two handy features: Night Mode increases quiet sounds and reduces the loud ones, while Speech Enhancement focuses on dialog by enhancing “the audio frequencies associated with the human voice.”

In terms of content, you can sync streaming services like Amazon Music, Apple Music, Spotify, Tidal and more. Apps like PocketCasts and Calm are also on the list, so you can get access to much more than music. Plus there’s Sonos Radio, which provides streams of radio stations and original content. Basically, the Sonos app can be your one-stop media library — at least in terms of audio.

And we haven’t even discussed voice control yet. Like previous Sonos speakers, the Arc works with either Alexa or Google Assistant. Thanks to four far-field beamforming microphones and echo cancellation, those two voice technologies can turn on the TV, adjust the volume or handle any of their regular duties — even while something is playing. If your television and other smart devices support those voice options, features will likely be more robust, but just know Arc will handle the basics right out of the box.

At $799, Arc is a significant investment. As I’ve already mentioned, it’s $100 more than the Playbar and Sonos no longer offers the Playbase. (Both are in the Last Chance section of the Sonos online store while supplies last.) If you aren’t interested in Atmos, and don’t mind some sonic sacrifices, the Beam is still a solid option at $399. It only has a single HDMI jack as well, so you’ll need to keep that in mind. If you’re buying a la carte, adding the new third-gen Sub will cost you $699 and a two-pack of One SLs is $358. Sonos does offer bundles with either a Sub or a Sub and two SLs for $1,498 and $1,856, respectively. Some quick math will tell you there’s no discount for buying in bulk, so if you’re unsure about committing extra funds, waiting doesn’t cost you more.

When it comes to non-Sonos alternatives, I like the Sony HT-ST5000 and Sennheiser Ambeo Soundbar. The HT-ST5000 comes with a wireless sub and a lot of connectivity: one HDMI (ARC) output, three HDMI inputs, USB, Ethernet, analog (3.5mm aux), optical, Bluetooth and WiFi. It also supports Chromecast and Spotify Connect. Like Arc, it beams sound all around you (7.1.2), so you don’t have to place more speakers all over your living room. It’s more expensive at $1,500, though we’ve seen it on sale for less. Sony recently announced the HT-G700, a $600 3.1 channel soundbar that offers Dolby Atmos and the company’s virtual surround engine. It has a number of premium features at a more affordable price. The $2,500 Ambeo Soundbar is a beast in more ways than one. It’s expensive and it’s huge, but it also has massive sound that’s impressively immersive from a single speaker. It too has more connectivity than the Arc, but it’s a much more significant investment.

The Sonos Arc is a much-needed upgrade to the Playbar many of us have been clamoring for. Dolby Atmos support makes the company’s flagship soundbar more immersive  — if you have the TV to accommodate it. The single HDMI jack will be a disappointment to many looking for all the detail and directional audio Atmos offers without having to sacrifice a port or having to upgrade to a more recent TV. Still, Arc works well as both a soundbar and a speaker, and the device will fit in nicely with recent Sonos gear you might already have for a multiroom setup. There’s plenty to love, but at least one more HDMI port would’ve made this a truly outstanding product. Instead, you’ll have to do some research to ensure you can use the Arc to its fullest potential.