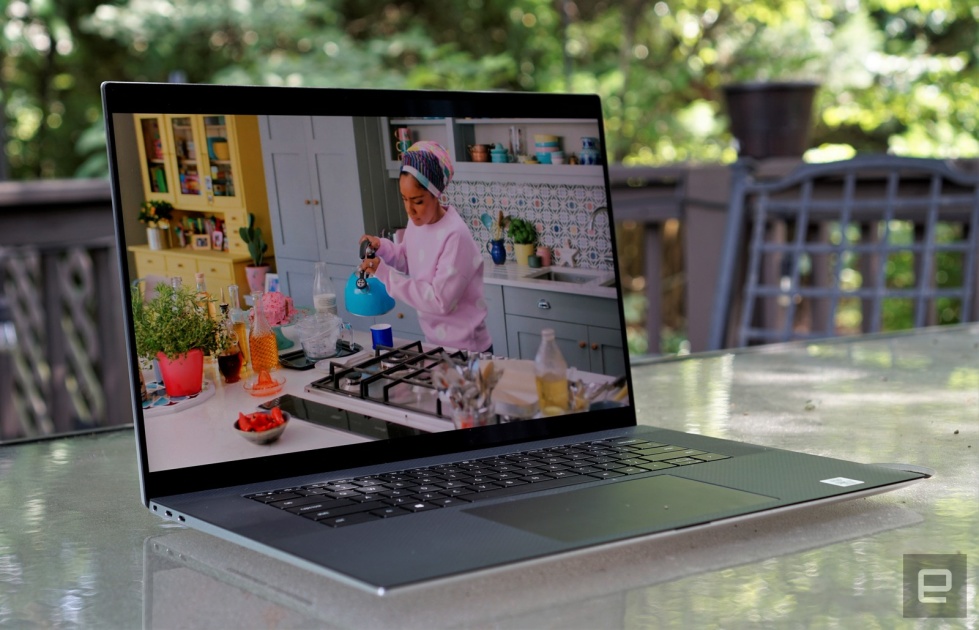 The screen is the star of the show, as you’d expect. I compared the XPS 15’s display to the inky black monolith from 2001: A Space Odyssey — the XPS 17’s is like staring into vastness of space. The 4K+ touchscreen on our review model looked just as great as Dell’s other premium laptop displays, with vibrant and accurate colors, as well as Dolby Vision HDR for video. The key, of course, is that there’s just so much to take in. There was more room for multitasking across Slack, Chrome, Evernote and my usual productivity apps. And watching anything on Netflix felt like I was plopped down in front of an enormous TV.

The XPS 17 is clearly a laptop that demands a desk, though. I was able to get some work done while holding it on my lap, but I wouldn’t want to do that for too long. It features the same excellent keyboard and trackpad from the other XPS models, though typing requires a bit more concentration since you also have to worry about balancing a larger machine. During our battery benchmark, which involves looping an HD video, the XPS 17 lasted 12 hours and 25 minutes. In comparison, the XPS 15 clocked in around 10 hours. But despite its solid battery life, its size alone makes it something I’d never want to bring on a flight (whenever we start going on those again).

On the other hand, it’s the XPS I’d want if I were editing video and dealing with 3D rendering. In the PCMark 10 benchmark, the XPS 17 blew away the 15-inch model, thanks to the vastly more capable GPU. Both laptops featured the same Intel Core i7-10875H CPU. That NVIDIA GPU also gave the XPS 17 a big leg up in the Geekbench 5 Compute benchmark, and it made the laptop twice as fast as the XPS 15 in the 3DMark Skydiver test. I didn’t even bother to test Overwatch — I knew it would be more than fast enough. But in the Hitman 2 benchmark, the XPS 17 clocked a respectable 85 frames per second average at 1080p with all of the graphics options maxed out. The XPS 17 also transcoded a minute-long 4K video sample in 32 seconds with GPU-powered encoding, putting it alongside some of the fastest machines we’ve seen recently, like the Zephyrus G14 and MacBook Pro 16-inch.

Basically, if you’ve been dreaming of the ideal premium notebook from Dell, one that could handle video rendering work while playing some games on the side, the XPS 17 could be for you. I don’t want to sound too effusive though, because it’s definitely more cumbersome to carry and use compared to its smaller siblings. And despite its larger size, it still comes with just four Thunderbolt 3-capable USB-C ports. The only legacy connection is a full-sized SD card slot.  I’ll continue recommending the XPS 13 to most potential PC buyers, while the 15 makes more sense for power users. But it’s nice to have something around that’s even more capable.