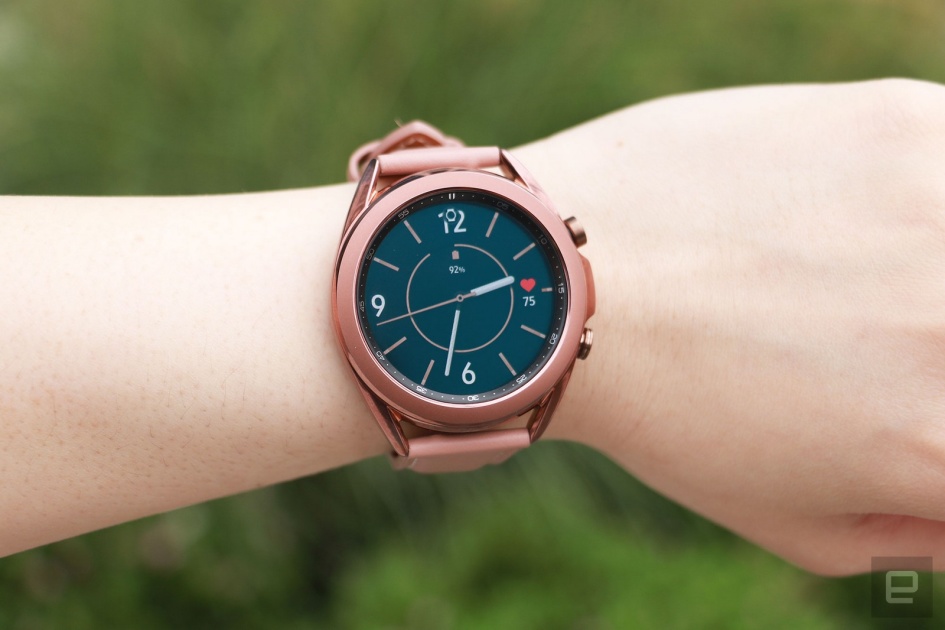 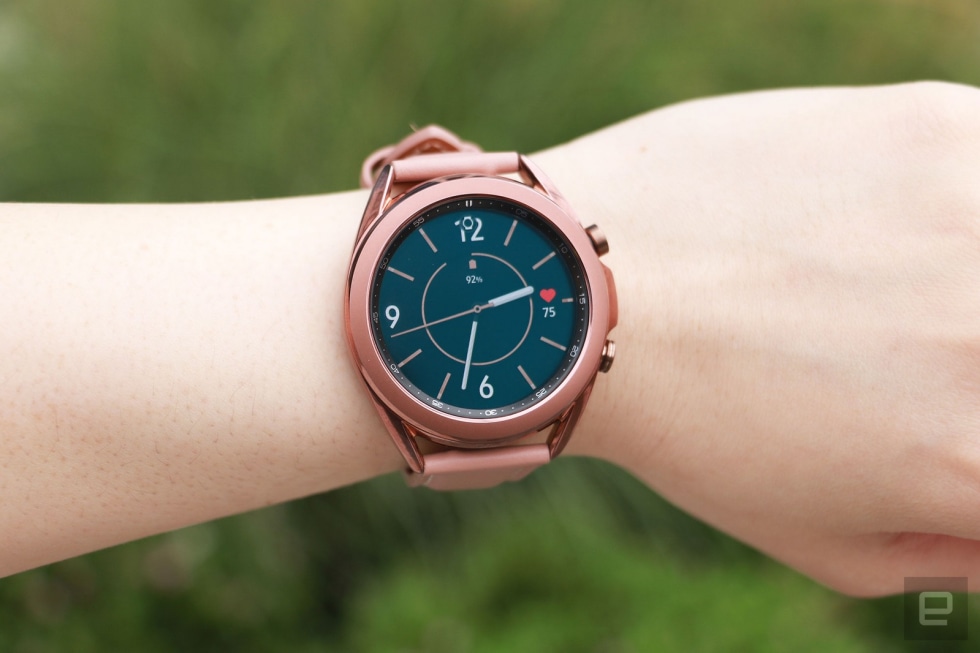 I was a little worried when my colleague Chris Velazco came back from his hands-on saying that the Watch 3’s rotating bezel was lighter and smaller than the original’s and that it didn’t clunk into each notch as definitively as before. But I was relieved when I used the wheel on my review unit. It’s a lot lighter and smaller, yes, and glides past each notch more smoothly than before. But it doesn’t spin freely and there’s enough resistance that you have to be fairly deliberate when twisting it from one notch to the next. If the original Galaxy Watch’s bezel moved like the Big Wheel on The Price Is Right, the Watch 3’s feels more like the whizzing spinner on Wheel Of Fortune.

In between the rotating bezel and the 1.2-inch display sits a ring of small carvings for five, ten, and fifteen minute marks. It’s a design flourish that isn’t actually helpful, especially since a regular watch would have “1, 2, 3,” to show the hours rather than the “05, 10, 15” here, but it’s nice to look at. The Apple Watch and Fitbit Versa 2 both sport more minimalist and basic designs with squarish faces that I don’t care for.

Most of the Galaxy Watch 3’s new features revolve around making it a better health and fitness companion. The upcoming ECG tool, for example, along with new blood pressure readings, could help provide more insight to your overall health. But these are pending a software update and regulatory approval in the latter case, so I wasn’t able to test them for this review.

One of the updates that I was able to try was the new running coach. Samsung’s not the first company to provide real-time audio and visual feedback on your jog, but the latest wearables from its main competitors like Apple, Fitbit and Garmin don’t. Plus, Samsung is doing it for free, which is rare. Fitbit’s Coach service requires a subscription fee, for example.

After selecting a goal from options like “light running,” “calorie burning” and “speed endurance,” you can start your run. In the light mode, I was guided through four stages at gradually increasing speeds and the watch buzzed and told me to either slow down or speed up to hit the targets. When I met and stayed within the recommended range, the coach would tell me I was doing well, all with corresponding graphics on the display.

Every so often, too, the watch would say things like “Great pace, keep up this pace,” or “Think positively, you’re getting closer to your goal with every step.” It’s meant to be encouraging but, when delivered in its very robotic voice, it borders on creepy. Plus, sometimes it would say weird things like, “Can you feel yourself working hard? What does it feel like?” and “Are you feeling well enough for exercise today?” That last one made me wonder if the watch detected some kind of anomaly and that maybe I shouldn’t work out, but it was just asking a casual question, not making an observation.

The Watch 3 shows more-comprehensive analysis for runs than for other workouts. In addition to the usual average heart rate, session duration and calories burned, you’ll see feedback on your symmetry, contact time, flight time, stiffness and regularity, with advice on what areas you need to improve. You’ll get more guidance like suggested drills and charts showing your cadence and pace when you view your session in the Samsung Health app on your phone. I’m not a hardcore runner so this information isn’t super useful to me, but exacting athletes will likely appreciate the extra data.

I may not be an expert in exercising but I’m basically an Olympic gold medalist when it comes to sleeping. Samsung updated the Watch 3’s sleep-tracking to use the heart rate monitor and accelerometer data. This is a very similar approach to Fitbit, and uses the info to estimate how much time you spent in zones like REM, light sleep, deep sleep or when you were awake. Samsung will count the time you spent asleep and other factors like restlessness to assign you a score.

I had a terrible night drifting in and out of sleep before being awakened at 6:45 AM by a delivery person. When I looked at my watch later, I was unsurprised to see the Watch 3 had recorded four separate sleep sessions for the night, each period corresponding with times I had woken up. I don’t know all the exact times, but the watch accurately matched one instance when I remember noticing the sun was beginning to rise. Samsung scored each of these sessions between 30 and 40 (out of 100), which makes sense since they were all only about an hour long.

According to the watch, I barely spent any time in the restorative “deep sleep” zone, instead mostly hanging around light and REM sleep. There is no real way to tell if Samsung is accurate in detecting these zones, but the Watch 3 so far matches my experience. With this, Samsung joins Fitbit in offering more insight on your sleep than Apple, even with the watchOS 7 beta that has yet to publicly roll out. The Apple Watch will log the amount of time you were asleep and note interruptions, but won’t tell you what zones you were in, which paints a better picture of sleep quality.

Your overall wellbeing isn’t just about working out and sleeping. Tizen OS health-tracking continues to outshine Wear OS and Fitbit OS. It offers helpful widgets for logging your food and water intake, and while I’m dubious on the accuracy of its stress-tracking tool, it at least offers some guided breathing exercises to help you relax. I especially like that when the Watch 3 notices you haven’t moved in an hour, it’ll not only prompt you to get up and move, but also suggest some easy exercises you can do at your desk. Plus, when I accepted one of these recommendations and did a set of five torso twists, the Watch gave an onscreen graphic of how to do the action and tracked every single rep accurately. No other smartwatch offers this.

I like a lot of things about Samsung’s software, but I wish its heart rate monitor were faster. It takes about 10 to 13 seconds to get a reading, at which point impatience has usually driven my pulse up. This could also impact its ability to keep up when monitoring your cardio zones during a workout — though I wasn’t able to constantly keep an eye on the watch when exercising. Meanwhile, the Fitbit Versa 2 and the Apple Watch generally take about five seconds.

Although Samsung added some new tools to make the Watch 3 a more serious fitness companion, it still feels better suited for a more mainstream user than a professional athlete. New stats like VO2Max give more insight into your body’s performance during a workout, while blood oxygen (SpO2) readings are sometimes called the “fifth vital” metric by which to assess your health. (The first four are your pulse, temperature, blood pressure and respiratory rate.) These are helpful in specific circumstances but not of much use to the average person.

Samsung just released a software update that allows you to get SpO2 readings on the Watch 3, and I got results between 98 and 99 percent. The Watch 3 interface showed me that this was on the extreme right end of a spectrum, but there was no other way to understand what that meant. Was I healthy? How did I rank against other people my age and gender? I always appreciate more data, but I had to go to Google to make sense of it. Thankfully, my result is normal (above 95 percent is normal, and you should see a doctor if you get something lower).

The Galaxy Watch 3 also offers a feature that first showed up on an Apple Watch: trip detection. It’s basically Apple’s fall detection, except Samsung used a different name. The Galaxy Watch 3 will notice if you’ve fallen while you’re in motion, not when you’re still, and send an SOS message with your location to up to four contacts you’ve selected.

I deliberately hurled myself onto a yoga mat a few times, but never triggered the system. I even fell a couple times during my workouts, but the Watch 3 didn’t register them, possibly because I was tracking my exercise. I can’t safely test this feature to see if it will work in life-threatening situations, but at least you don’t have to wait till the Watch 3 determines you’ve fallen to get help. You can push the home button on the side three times to call your emergency contacts and share your location with them, too.