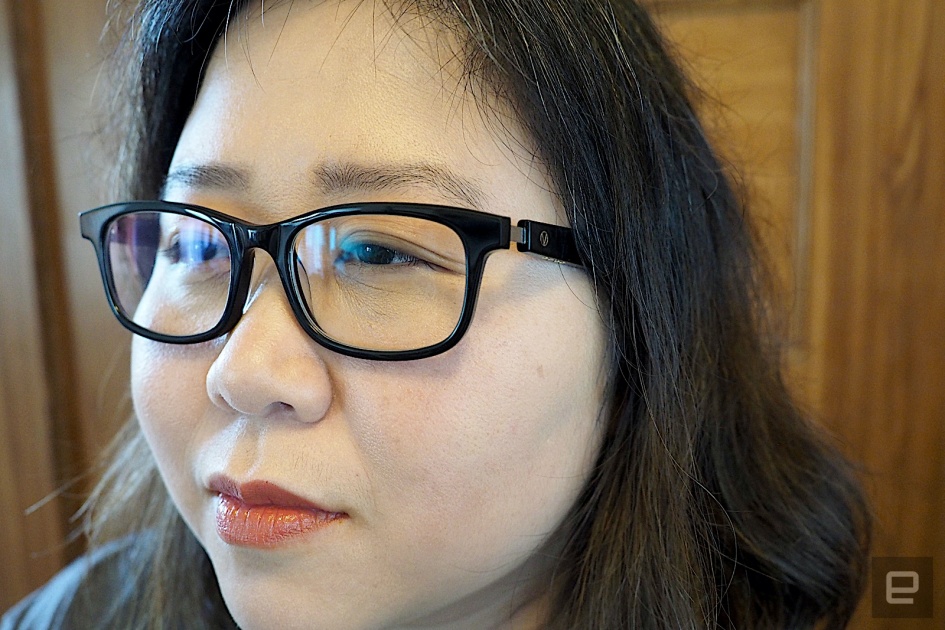 In a lot of ways, the Vue Lite is akin to Amazon’s Echo Frames (which haven’t officially launched yet) as well as the Bose Frames (albeit without the latter’s AR and gesture elements). But after trying out the Vue Lite for a few days, I have to say that I’m not a fan. Not only does it have a few usability issues, I’m not sold on the concept in general, and I actually think it could push people away from smart glasses rather than towards them.

Perhaps the best feature of the Vue Lite is that it doesn’t look like a pair of smart glasses at all. The model I tried had a standard rectangular black frame made out of cellulose acetate, with no obvious indicator that there was anything unusual about it. According to Vue, the glasses weigh around 23 grams without the lenses, with front frame choices of cellulose acetate, metal or titanium. Vue also offers prescription lenses in addition to clear, blue light filtering, tinted, polarized and photochromic options. Though the design of the glasses didn’t quite fit my face shape, I do really like the style of it in general.

Flip the Vue Lite over, however, and you’ll see some telltale signs that these are no ordinary glasses. Each arm has four magnetic charging pins, with which you would attach two magnetic charging cables. When it’s charging, a small LED will glow red and then turn off when it’s fully charged. There are also touch controls on either side near the hinges, helpfully indicated by the Vue logo.

The setup of the Vue Lite isn’t entirely intuitive and I would advise reading the instructions before pairing it with your phone. The reason for this is that each side of the Vue Lite operate independently of each other, and only become connected through the pairing process. So when you turn on the Vue Lite for the first time, you’ll need to power on both arms by pressing on both touch buttons simultaneously (both sides will audibly say “Power On” to indicate this has occurred).

After that, the Vue Lite will enter pairing mode (It’ll say “Pairing” to let you know it’s doing so). From there, you can go into the Bluetooth settings of your phone, and select “Vue Lite” to begin. After it’s connected, you’ll then get a second pairing request, which is what syncs the arms to each other. If you make the mistake of simply powering on one side and not the other (like I did initially), then you’ll only get audio from one side and the Vue Lite might not work properly.

Those aforementioned touch controls are the main ways to control the Vue Lite. You can supposedly double tap to play music or answer calls, and long press (around five seconds) to trigger your phone’s voice assistant. Unfortunately, I found this to be a little hit or miss for me. Sometimes those controls would work as advertised, but other times, they would not. It would often take me several tries before a long press would wake Siri up, for example. This is especially tricky because a long press of about eight seconds would power off the Vue Lite completely. Sometimes the glasses would even power off without me touching anything. Vue has said to me these issues could be due to buggy pre-production firmware on my model, but it’s worth noting anyway.

Unlike the Vue Pro, which has bone conduction audio technology, the Vue Lite utilizes directional speakers for “open ear listening.” The idea here is that the speakers can “point” sound waves towards your ear so that you can listen to your music or the phone call while still hearing what’s around you at the same time. This is the same technology found on the Bose Frames as well as Amazon’s Echo Frames.

The audio quality on the Vue Lite is just okay. There’s practically no bass to speak of, and music generally sounded a little lackluster and bland compared to using a pair of headphones. But when I used it for listening to podcasts and audiobooks, that wasn’t a problem. Calls sounded pretty clear, and I was pretty impressed with the outgoing call audio too (I swapped devices with my husband so I could hear what it sounded like on the other end).

Where the audio quality really takes a nosedive is when I used it in a noisy environment. While being able to listen to your surroundings sounds like a good idea in theory, it’s not so great when trying to make out what exactly a podcaster is trying to say while walking on a busy sidewalk.

Plus, there is significant sound leakage with the Vue Lite. When the audio is at max volume — which it often needs to be so that I can hear what’s being said — I can actually place it on the table, walk several feet away and still make out what’s being said. The audio is certainly softer and more subdued of course, but that’s not great if you’re trying to have a private conversation or if you’re listening to a guilty pleasure tune.

As for battery life, it lasts about a day on standby and around three to four hours of continuous playback. That’s not great, especially because when you’re charging your glasses, you then won’t have access to your glasses, which some people might need for, you know, seeing. And even if you keep your audio listening to a minimum, having to charge your glasses every night before you go to bed can be kind of a pain.

There are other features that are missing on the Vue Lite too. The Vue Pro has an activity tracking feature along with the ability to “find your glasses” via an app. The Vue Lite has neither. I understand that this is to cut costs — it’s called “Lite” for a reason — but without these extra features, these are just glasses with built-in speakers. At least the Bose Frames had the promise of an AR ecosystem that’ll alert you to nearby restaurants or landmarks, and even gesture-based navigation (though they weren’t live at the time of our review).

But just on its own, I don’t get it. I understand that there are some people that dislike the feel of earbuds or headphones in/on their ears, but I am not one of them. Using these glasses for a week just made me miss my earbuds. I would probably prefer a pair of glasses like the Level by VSP (which are currently being discontinued), which are regular glasses with an activity tracker but no speaker. They’re in a completely different category, but I would even prefer a “real” pair of smart glasses like the AR-enabled North by Focals. Sure, they’re extremely expensive, but at least they have unique and useful features beyond just speakers.

In short, the Vue Lite — as well as glasses with open-listening speakers — just aren’t for me, at least not in their current iteration. But if you’re keen on them, then you can check out their site and pre-order them starting today. It’ll begin shipping in September of this year.