GoPro Hero 9 Black: Everything you need to know 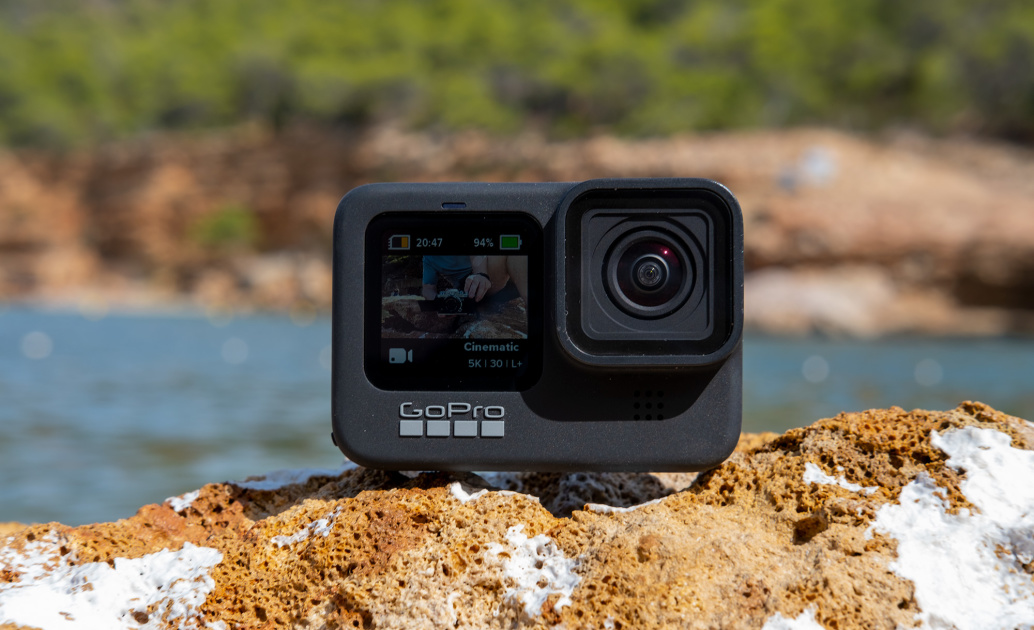 Probably the standout feature (at least visually) this year is the addition of a 1.4-inch front-facing display, similar to the one found on DJI’s Osmo Action. The new screen is there so you can set up the perfect selfie, or make sure the whole family is in frame before you click record.

The new screen isn’t touch-enabled, but you can choose what it displays. Your options are: Full Screen (a zoomed-in view that fills the whole display), Actual Screen (a live preview of what the camera sees with black letterbox bars, and Status only (current mode, battery life etc.). The first two options will also show this data, just smaller. You can also turn the display off completely if you like.

The Hero 9 is a shade bigger than the Hero 8 (by 5- or 6mm on each side), it’s also 32 grams heavier. Part of the reason why is to accommodate a larger, 2.27-inch screen and a new battery (more info below). The larger display also means on-screen buttons are a shade bigger than before making them easier to poke.

The Hero 8 saw the (re?) introduction of mods for the GoPro. Those same mods are back for the Hero 9 with some minor improvements (the $80 media mod is now weather-resistant and comes with a removable foam windshield). The Display mod (a fold-out back screen) returns for $80 also, and the same Light mod ($49) from before is compatible with the Hero 9 too.

Most exciting of all, is the introduction of a “Max mod” for the Hero 9. This introduces some of the best features from the Max to the “regular” Hero 9. That means far superior HyperSmooth (stabilization), a much wider field of view (similar to Max’s SuperView), and 360-degree horizon lock. It also means you’ll be able to add filters to the Hero 9 again — something you couldn’t do on the Hero 8. Whether there will be more official lens mods, or third-party options remains to be seen. The Max mod actually sits on top of the regular lens, so it’s not as straight forward as changing lenses on a DSLR.

The new Media and Display mods are available today, with the Max mod coming next month (the Light mod is the same one already available).

Both HyperSmooth and TimeWarp get a little refresh, earning them the “3.0” title. In practical terms, this means improvements to the in-camera stabilization (HyperSmooth) and a new “half-speed” option when recording TimeWarps — like the existing “real-time” mode, just… slower.

Both HyperSmooth and TimeWarp are compatible with the new in-camera horizon leveling. It’s only available in Linear mode for video, but it’ll make sure your horizon stays steady during hard turns of if you mount your camera wonkily. It’s not able to lock the horizon through 360 degrees like Max can, but up to around 45 degrees of tilt will be straightened out, after which the camera with adjust back to the actual angle you’re recording at.

Ever wanted to be able to set your GoPro to turn on and start recording at a certain date/time? Now you can with Scheduled Capture. Don’t want to record hours of footage? Duration Capture lets you tell it when to switch off. Basically, you don’t even need to be at the camera anymore to turn it on, record and switch it off again.

Another new tool is HindSight, which is a fusion of the existing loop recording option (where the camera records for a set time on repeat, without eating up your memory card) and LiveBurst (which takes photos before you press the shutter button). As the name suggests, it allows you to catch something that happened just before you pressed record.

Not a fan of the clunky plastic that you bought old GoPros in? Good news, the Hero 9 not only comes in plastic-free packaging, but it’s now replaced by a carry case you can take with you on adventures. The nylon, zip-up pouch will keep your camera and some accessories safe on the road, and you now have one less thing to throw away.

GoPro’s trying something different this year. Typically new Hero Blacks cost around $400. The Hero 9 technically costs $450 at launch. But (and it’s a big but) in reality it only costs $350. The deal is, if you sign up for a year of the company’s cloud-based Plus (for storing unlimited videos, discounts on accessories and so on) you get the camera and the subscription for $150 less than if you bought them both separately. Or $100 less if you were just shopping for the camera. What’s more, existing Plus subscribers will receive a voucher for the same amount of discount.

If it’s not listed here, and the Hero 8 does it, then it’s almost certain that the Hero 9 does it too. That includes the recently announced webcam mode, 1080p live streaming, digital lenses, voice control and more. So now you know, you can head to our full review to find out how all those new tricks and tools work in real life.