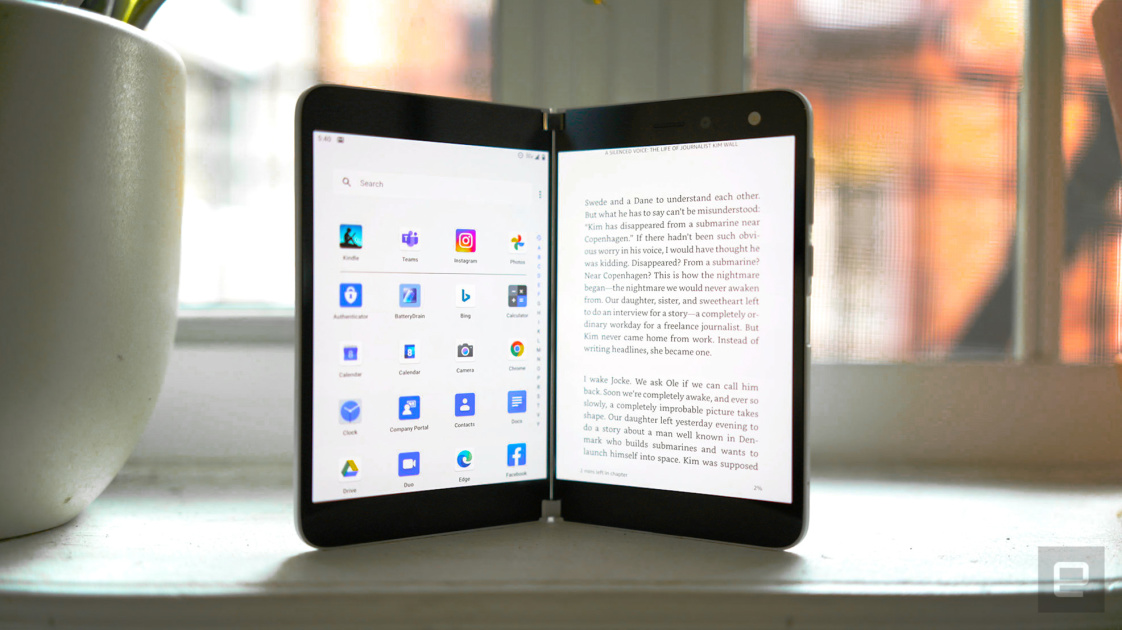 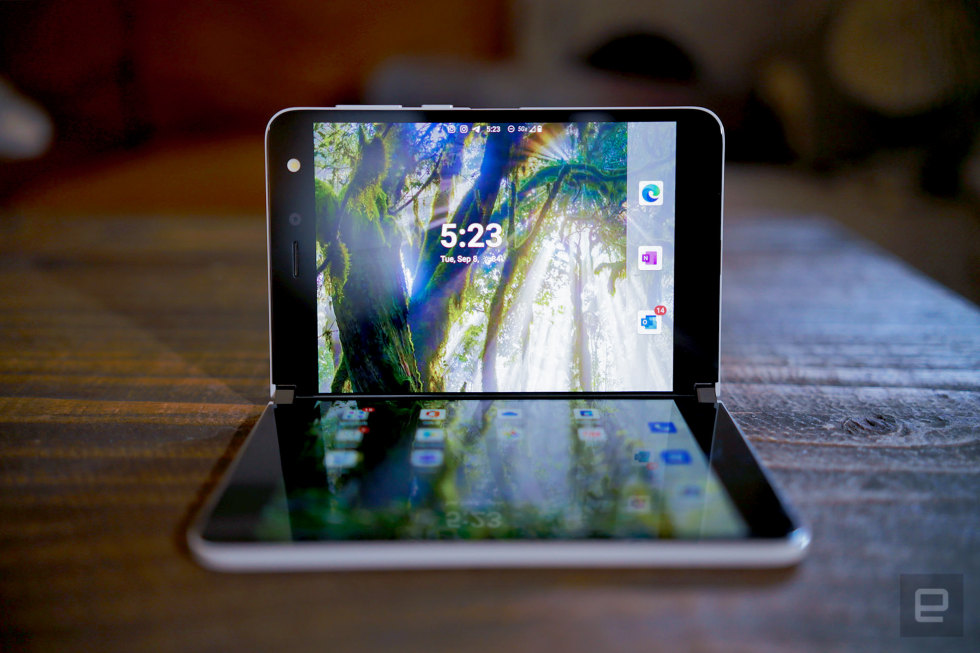 As two screens joined together (book or laptop)

Someone on Twitter said they made their own version of the Duo by sticking two smartphones together with tape. Frankly, that’s the best way to think of the Duo — a pair of connected phones. The hinge between the two screens is minimal, but it still creates separation. This is bad for doing things in tablet mode, but is perfectly fine when running apps side by side.

This book-like configuration is the perfect “posture” for multitasking — I went on a Solitaire binge on the right screen, which I used most of the time and relegated the left side to things I didn’t need to actively engage in like Twitter. Sometimes I had a YouTube video going on the left and Google Keep on the right to note timestamps of important moments. I also went through a list of shows leaving Netflix on one screen, while adding them to my watchlist on the other. Artists could have a reference photo on the left while drawing with the Surface Pen on the right.

There’s a lot you could do with the dual-screen setup, and it gets even more useful with a drag-and-drop feature. Pull up a recipe and copy its ingredients to a shopping list on the other screen, for example. Drag and drop currently only works with Microsoft tools like Word, To Do, Edge and PowerPoint, though. Developers need to set their apps as targets before you can pull from or paste into them.

One of the features Microsoft promised was that links you clicked in apps or browsers would open on the other screen if it was empty. While that sort of worked in Edge and Chrome (only if you select the “Open in other window” option after long pressing the link), it didn’t in Instagram’s in-app browser. That’s not a huge deal but it does seem like developers also need to tweak their code to support this.

My biggest trouble with running apps simultaneously was when trying to move them between screens. You can launch an app from the display where you want it. But if you want to switch it to the other side, you’ll have to flick up from bottom to find the handle, then hold down on that bar till the device vibrates before carefully dragging it over. The gesture itself is easy enough to learn, but the problem was the finicky software. A software update improved the overall reliability, but before that apps would disappear when I tried to move or expand them.

In fact, a lot of the Duo’s software is buggy, and I don’t have enough time or room to list them all out in this review. But Microsoft said it plans to roll out updates for the Duo every month, so hopefully the most glaring issues will get fixed soon enough.

But there are some things that might not change. For example, the notification shade here is the same size as on a regular smartphone, so on a screen as wide as the Duo’s, it feels very narrow. A Microsoft spokesperson told me that they were aware of this but kept the width so as not to “fork Android,” and it doesn’t sound like that will be changing anytime soon. The concern is that if Microsoft tweaks interface settings like this, it will be making a different version of Google’s OS that will require developers go out of their way to support.

Another issue with the notifications panel: when you have it down, you won’t be able to use either screen. So if you slide it down to see your alerts on the left display, you won’t be able to type a reply on a messaging app on the right until you dismiss the panel. This is another one of those things that Microsoft didn’t change because it didn’t want to “fork Android.”

Two things to note when using the Duo in this half-folded setup: You’ll want to mostly stick to portrait orientation. In landscape, where the device is more like a mini laptop, the software doesn’t quite know how to make use of the screen space.

When I tried to log into Google Drive on the bottom screen with a video playing on top, the keyboard took over the entire bottom display so I couldn’t see what I was typing… which turned out to be nothing, despite having definitely pressed the letters.

If you’re using the Duo’s screens in landscape, you’ll want to save the bottom half for the keyboard instead of running two apps at once. Though, I also had an issue with Telegram jumping to the lower display after I was done replying a message and dismissed the keyboard. Again, this is something that could be fixed by a software update.

What can’t be fixed though is the Duo’s speaker. It sits behind the left display, so if you’re watching a video on the right, it can be slightly jarring. It’s a relatively minor issue, though, just make sure if you want to open a video in this setup to keep it on the left panel.

My favorite way to use the Duo was actually to fold it halfway with both panels facing out for a traditional Tent mode. But instead of propping the device up on its edges, I laid one of the displays face down with the other looking at me. This turned the Duo into a sort of mini second screen so I could keep an eye on a YouTube chat during a livestream or play hours of Solitaire. This is something the Z Fold 2 can’t do since it can’t bend outwards.