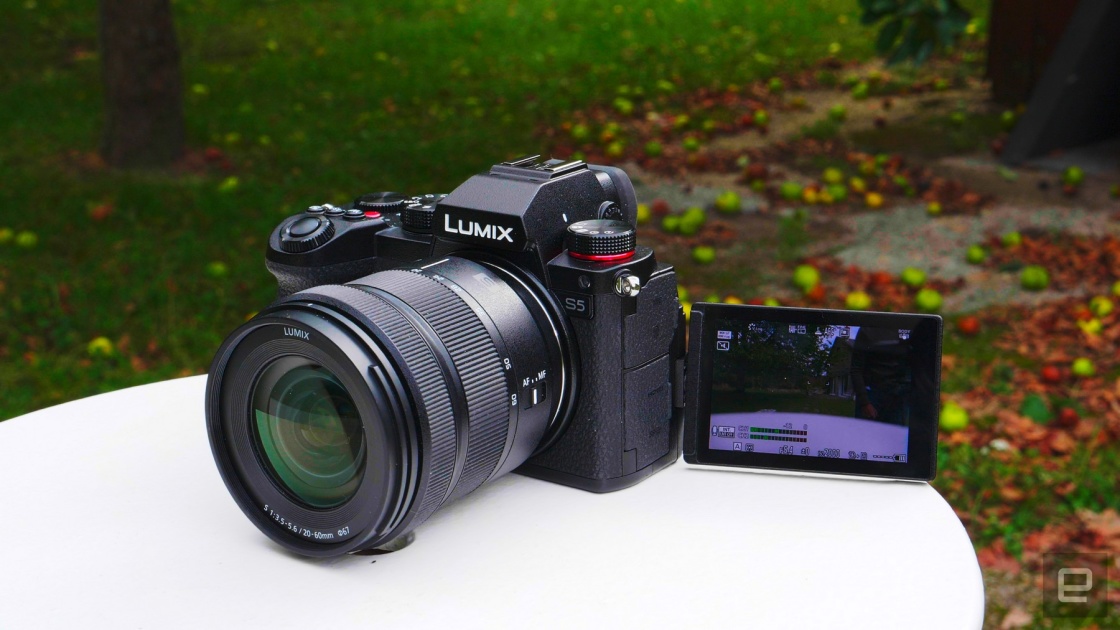 The S5 has five-axis image stabilization that works in concert with stabilized lenses. It delivers up to 6.5 stops of stabilization, which is better than the GH5 but worse than the S1. As usual, the optical stabilization alone is great for hand-held video or low-light photos, but it’s no magic bullet. If you’re walking or doing action and need smooth shots, your best bet is to use a gimbal.

As for the autofocus, there’s good news and bad news. Unfortunately, Panasonic stuck with its contrast-detect system that’s inferior to the phase-detect autofocus used on Sony and Canon cameras, especially when it comes to video. On the positive side, Panasonic has drastically boosted the autofocus system speed and added AI smarts. That makes for faster subject acquisition and smoother face and eye-tracking.

Continuous autofocus for photos works great, especially considering the relatively slow burst speeds. For video, however, the biggest problem is pulsing, or small shifts into and out of focus, as the contrast-detect system overshoots and recaptures focus. With the S5, however, it’s much less visible than before, thanks to the extra speed and algorithm tweaks. In fact, I barely noticed it except for handheld shooting when I moved the camera around a lot, trying to track a border collie.

The S5 can shoot 4K 10-bit video in both full-frame and 1.5X cropped APS-C mode with full quality — giving you either very shallow depth of field or an extra 1.5x “zoom” if you need it. However, the autofocus works a bit faster in APS-C mode because there are fewer pixels to process. All that is to say that if you’re shooting something that’s moving around and need to depend on the autofocus, it’s best to switch over to APS-C mode if possible.

Speaking of which, the face/eye-detection now finds faces that are much smaller in the frame, and tracks bodies at speeds five times faster than before. It can also follow your subject if they turn or tilt their heads, but can get fooled if they walk out of frame.

Overall, the S5 nails focus a lot more reliably than the larger S1 series. However, there’s good news for S1, S1H and S1R owners — all of those cameras will soon get firmware updates that give them the same accelerated autofocus capabilities of the S5.

Now, let’s talk about the S5’s true forté, video. Cutting to the chase, the S5 outshines the larger and more expensive S1. Period. Like the S1, it supersamples to capture extremely sharp full-frame, APS-C and pixel-for-pixel video at up to 4K and 60 fps. After that, however, the S5 has a clear edge — even if you have the $200 video firmware option for the S1. .

In addition, by the end of the year, Panasonic will make the S5 a lot more attractive for video pros via a firmware update. That includes support for RAW video with the $600 Atomos Ninja V, with resolutions up to 5.9K (5,888 x 3,312) at 30 fps. It’ll also deliver support for C4K (4,096 x 2,160), a video assist function, vectorscope display and shutter angle support (very handy for videographers) on top of shutter speed.

Panasonic said that it tested the S5 recording limits over a wider temperature range than rivals like Canon — which is suffering from some bad press over potential overheating issues on the new EOS R5 and R6 models. At temperatures up to 40 C (104 F) the S5 has a 30-minute recording time limit for 4K 60p and 4K 10-bit 30p video, but Panasonic said it could potentially run for longer under normal conditions. At different resolutions and frame rates, like most 1080p modes and 8-bit 4K, there are “no limitations” on recording, the company told Engadget.

If you were looking for the l-frame recording mode found on the GH5 (which records each frame individually to supposedly speed up editing) it didn’t make the cut due to overheating concerns. I didn’t particularly miss it.

I tried vlogging with the S5, and it performed really well. The flip-out touchscreen makes it easy to change the focus point or video settings, while the stabilization smooths out minor bumps and jolts. And while contrast-detect autofocus isn’t perfect, it works very well with the camera near your face. The built-in mic has decent enough sound quality, but it’s also easy to plug in an external shotgun or lapel mic. For $2,000 (plus a lens), I believe the S5 is the best full-frame vlogging camera available right now.

As Sony well knows, rolling shutter can be hard to control on CMOS sensors. Luckily, the S5 handles it better than most other full-frame cameras. It’s still present if you do quick pans or jolt the camera, but it’s reasonably well controlled. If it becomes an issue, you can reduce it considerably by switching the camera to cropped APS-C or pixel-for-pixel recording modes.

In terms of video quality, the S5 gave me exactly what I expected. I liked the sharp 4K video with realistic colors and natural flesh tones, while the 10-bit V-Log-L video delivered excellent dynamic range and plenty of room to color correct or create HDR videos. Panasonic said it used the same color science on the S5 as its professional Varicam cameras. That means film crews could use the S5 as a B-cam and easily match up the colors.

The S5 has an ISO range from 100-51,200 (expandable to 50-204,000 ISO), along with a dual native ISO system that automatically switches to a more light-sensitive circuit in dim lighting. With all that, it handles low-light conditions very well. Don’t expect the near pitch-black shooting capability of Sony’s A7S III (which has quadruple the pixel area) but the S5 can keep up with the A7 III, keeping noise down at ISOs as high as 25,600. Even at those levels, video is sharp and retains color saturation and accuracy.

The S5 has similar controls to the GH5, so users of that model won’t have much trouble switching over. However, the S5’s huge sensor offers a much shallower depth of field with more creative options. For example, you’ll be able to isolate interview subjects from their backgrounds without a super-fast lens.

With the S5, Panasonic took its good existing S1 camera and effectively made it great by fixing the slow autofocus, adding extra 4K video features and making it a lot smaller. It would normally be an easy pick for video creators, but the competition hasn’t stood still, either.

Canon’s $2,500 EOS R6 has higher internal data rates and superior Dual Pixel phase-detect autofocus, plus it’s better for still photography. However, the S5 is $500 cheaper and should suffer less from overheating issues that can cripple video recording on the R6. The Nikon Z6 can be found for $1,800 right now, but it lacks key features like internal 10-bit 4K recording and dual card slots.

Fujifilm’s $1,700 X-T4 matches the S5 nearly feature-for-feature, but has a smaller sensor that’s worse in low light and lacks that super-shallow depth of field. For $500 less, Panasonic’s own GH5 has a few extra video features (like the aforementioned I-frame option), but it has an even smaller sensor. Meanwhile, the S5 seems to have made the S1 redundant, as it does nearly everything better while being smaller and cheaper.

The Panasonic S5 is now up for pre-order and will start shipping in mid-September at $2,000 for the body only, or $2,299 with the 20-60mm f/3.5-5.6 lens that I found ideal for vlogging. It’s also offering a limited pre-order promotion with a free Sigma 45mm F2.8 DG DN L-mount lens, while supplies last, provided you purchase an S5 by September 30th. That would give you a very decent (and free) normal prime lens to get started.

When you add up all the features, including the stabilization, large sensor, 10-bit 4K options, smaller size and flip-out display, the S5 is an impressive hybrid video and vlogging camera. Right now, I’d say it’s the best you can get for $2,000 — to do any better, you’d have to spend considerably more.